The Dark Heart of Uukrul

comments (1) / downloads
The Dark Heart of Uukrul is an abandoned DOS fantasy rpg game, developed by Digital Studios Limited, designed by Ian Boswell, Martin Buis and published by Broderbund in 1989. It's available for download.
Abandonware DOS is made possible by displaying online advertisements to visitors.
Please consider supporting us by disabling your ad blocker. 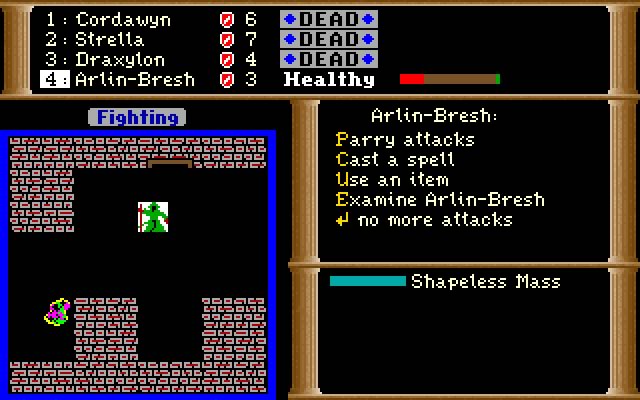 The Dark Heart of Uukrul downloads

DOS Games can't run on Windows. You need an emulator such as DOSbox and/or a front-end like D-Fend Reloaded. Follow these instructions to run DOS games on Windows systems.

Tell others what you think about The Dark Heart of Uukrul: did you play it? Did you love it or hate it? Your e-mail will NEVER be used for spam.

Abandoned games similar to The Dark Heart of Uukrul

Amberstar
1992
Terms and conditions Privacy policy Cookie policy
We use cookies to improve user experience and analyze website traffic. For these reasons, we may share your site usage data with our analytics partners. By clicking "I agree" or if you continue browsing our website you're giving your consent to receive all cookies on this website and from third parties and you consent to store on your device all the technologies described in our Cookie Policy.
I agree
Click the link below to start the download.
The game is provided as a zip file "as is". There's no installer. To run a DOS game you need an emulator like DOSBox and/or a front-end like D-Fend Reloaded. To run a Windows game you will probably need a virtual machine.
Abandonware DOS is a free service. However, there are costs to sustain.
You can help with a small PayPal donation: you choose the amount.