Balance of Power: The 1990 Edition manual

Balance of the Planet

Crisis in the Kremlin 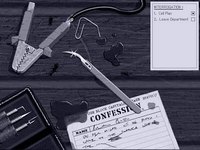