It Came from the Desert walkthrough 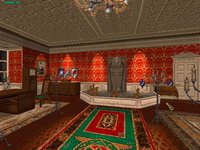 Realms of the Haunting
1997

Journey to the Center of the Earth
1988