Legend of the Sword manual 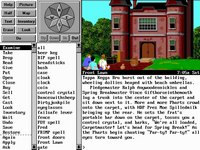 Zork Zero: The Revenge of Megaboz
1989