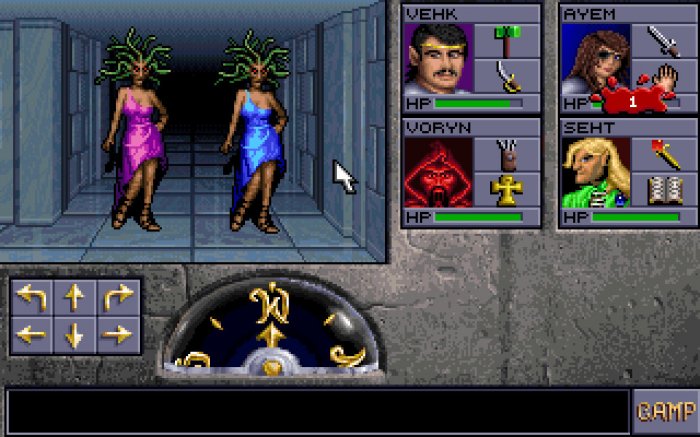 Dungeon crawling was the main purpose in the first CRPG (Computer Role-Playing Game) ever to came out on a computer. The first CRPGs were a sort of early roguelikes back then, and by "back then" I'm talking decades ago. Anyway... after a few years, thanks to the capabilities of the wonderful PCs of the 90s, dungeon crawlers became 3D (well, 2D simulating 3D, actually) and much more appealing to a much broader audience. That was when developers crafted some of the greatest RPGs ever to be published for PC:
These games were perhaps the most popular of their time; many pages were written about them on every video game magazine of the 90s. There were also games that tried to achieve the same quality of gameplay and graphics; some of them managed to do a decent job, others didn't even came close:

A special mention goes to Captive, one of the few crawlers with a sci-fi background (and a damn good story premise).

So, what happened then? Wolfenstein 3D happened. What? An FPS, really? Yes, really, because as soon as Origin (and other companies) saw what Romero did with Wolfenstein and Doom, every RPG developer started to look in a new direction: no more turn-based movent, enter real-time. That meant a lot of changes and 3D dungeon crawlers started to lose their appeal piece by piece.
Here's a few examples. The Lands of Lore series gradually shifted to a single-player no-party all-action experience. Ultima Underworld was praised by every RPG fan able to use the magic combination of mouse and keyboard and became the game to emulate. Might and Magic and Wizardry followed.
Baldur's Gate, Diablo and Fallout took a different approach, but the dice was cast: it was the end of 3D turn-based RPGs.

Let's fast-forward a few years. There's the Internet, a few abandonware sites and a lot of nostalgic gamers. The time is right and a few indie developers perfectly understood the alchemy between old memories and old gamers: enter dungeon crawlers again. Modern computers allowed developers to build on the old 3D crawler idea to implement some innovations, but the core of the genre remained the same. The single most important modern dungeon crawler that takes inspiration by glories of the past is without a doubt Legend of Grimrock.

Old video games are still a source of inspiration to modern developers. Defunct genres are still there (think about point & click adventures!), buried in the past, ready to be summoned back from the dead once again.