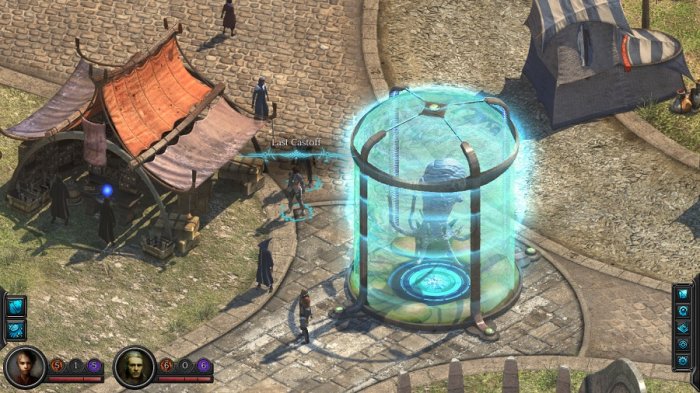 WHAT IS PLANESCAPE: TORMENT?
Planescape: Torment is, simply put, one of the best CRPGs ever released for PC. It was developed using the Infinity Engine (Baldur's Gate, Icewind Dale) by Black Isle Studios in 1999. Torment wasn't a commercial success, but it was very well received by critics and gamers alike: it became a cult classic in no time. Also, Planescape: Torment is remembered for being focused on characters and story rather than combat and loot. There is lots of text to read: dialogue, descriptions, quests. If you didn't play it back then, go get it from GOG and search for mods and fixes to play it in widescreen mode.

MY FIRST HOUR IN TIDES OF NUMENERA
The tutorial and the introduction to the world of Numenera and the story of Torment is like walking around in a thick fog. I mena... I wasn't welcomed by common RPG terms like "experience" or "warrior, mage, thief" or "potions". Instead, the game feeds you concepts like the "tides", "cyphers" and the three available classes: Glave, Nano and Jack. For someone that's refreshing, for someone else means learning a new terminology and a few new gameplay mechanics. After all, Tides of Numenera is sci-fi (sort of); this isn't your typical D&D role-playing game! Instead, this new Torment is based on the RPG system called Numenera, created by Monte Cook.
The tutorial tries to explain all this and throws in some story elements. Once again you have (almost) no memory of who you are and where you come from and that fits perfectly with the fact that you, as a player, know nothing of the Numenera world. You're learning about the world as your character walks around and talks to people.
At a first glance, the gameplay feels simplified and, like Planescape: Torment, it's clear from the beginning that the designers put much more effort in the dialogue and the story than anything else. There is a lot of text to read: descriptions of what's happening around you, lines of dialogue, etc. That put me off a little. In an era where anything is shown on the screen, the first scene of the game is just narrative. Ask yourself: am I prepared to read A LOT?
So, after a while, I finished the tutorial, explored a little, talked a lot to a couple of NPCs and to a machine (at least... I think it was a machine) and learned about crises. What is a crisis? It's a situation that requires you to take some action(s) and make choices, not necessarily involving combat. After these few steps in the world of Numenera, I can say that things are evolving in an interesting way. I already made an apparently game-changing choice and I can't predict the consequences of what I just did (and no, I'm not spoilering anything). This gives me hope for the game and makes me want to come back to see what is going to happen.

More on Tides of Numenera in a few days...

WHERE TO BUY IT?
Tides of Numenera is out on the major digital distribution platform. As you probably know it, I'm partial to GOG (it's called Good Old Games for a reason) so... here's the link where you can get Torment: Tides of Numenera on GOG.