Minesweeping at the office 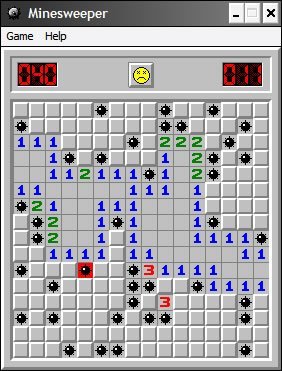 The Microsoft Windows 3.x family of operating environment wasn't known for games, but it popularized the Windows software pretty much everywhere. One of the best known Windows 3.x games was Minesweeper.

Minesweeper was a simple puzzle game that required the player to clear a field full of mines and numbers without exploding. Its simplicity and addictiveness were keys of its success; it's no wonder that it became very popular not only among gamers, but also office-workers. Minesweeper was the perfect game to play at the office (until Microsoft Solitaire...).

Minesweeper and its variants were bundled with many operating systems: OS2, Windows, etc. The version on Abandonware DOS can only be run in Windows 3.1.


Find out more about Minesweeper