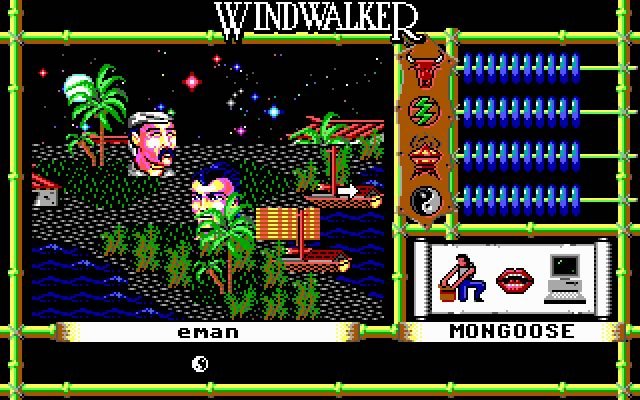 RPGs are a strange animal when it comes to old-school PC gaming. If you exclude huge hits and successful franchises, the games that remains are often obscure RPGs, sometimes so awful that playing them is a pain in the keyboard. There are of course exceptions: underdogs that somehow were a commercial failure but were actually nice.

Here's five RPGs from a few decades ago that fall in both categories.

It's a roguelike... sort of. It's even quite playable, but I have to admin I've never heard about Evets in my life. I'm pretty sure I've programmed something similar when I was at school, using Turbo Pascal.

All I remember about Windwalker (and its predecessor: Moebius) are weird big human heads on a map and tactical martial arts combat. Also, it was made by Origin.

Captive was good, really good. The premise: you awake on a space prison (space ship? space station?) and all you can do is take control of a handful of drones and send them on various first-person "Dungeon Master style" view missions.

An RPG by Psygnosis (the picture on the big box was gorgeous, in perfect Psygnosis style) that forces the player to make physical maps. It could've been cool 30 years ago... but it's not anymore.

Both SSI Buck Rogers RPGs (Countdown to Doomsday and Matrix Cubed) were "Goldbox" games that everyone forget to mention when remembering Goldbox classics like Champions of Krynn or Pools of Darkness. Believe me: both games deserve to be mentioned.