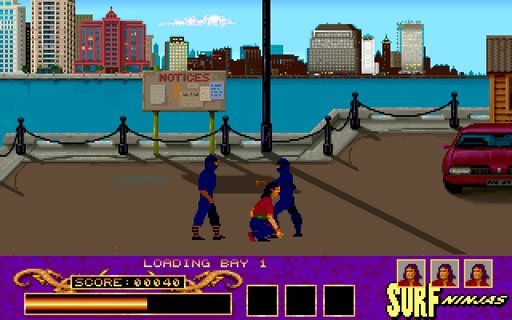 Movies have always been a source of inspiration for video games. Almost every successful movie has its video game (and sometimes even unsucessful ones). The results in the gaming world weren't always so good. I remember lots and lots of mediocre games that tried to patch together different moments of a movie, trying to capture every possible action genre in a single game: platform, shooter, racing all in one. These are some of the worst games based on movies ever released on PC (and I probably missed quite a few).

Perhaps Moonwalker was a good game on other platforms, but on PC... well... let's just say I didn't like it. Being constantly run over by horses is not my idea of fun. That, or I'm a bad gamer.

Gremlins was an ok movie form the 80s. It was only natural that someone tried to make a game out of it... unfortunately. The sequel "Gremlins 2" is a much better game than the first one, and still lacks quality.

Beverly Hills Cop is the classic example of what meant designing games based on popular movies in the DOS era: different kind of games all stuffed into one. Unfortunately each one of them is mediocre at best.

I honestly can't remember anything about the movie. Also, I never played Night Breed back in the day. I tried to walk a few screens without dying but I couldn't make it. The controls are plainly awful.