Skate or Die is an abandoned sports game, developed and released by Electronic Arts in 1988 for DOS and a number of other platforms. Skate or Die is a multi-sport kind of game, including every kind of unconventional "sport" done on skateboard. A sequel, Ski or Die, was released an year later.

How to play Skate or Die 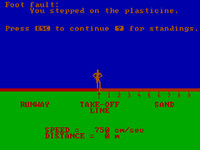