comments (0) / downloads
Baldur's Gate 2: Shadows of Amn is a party-based real-time with pause CRPG set in the Dungeons & Dragons universe that shares the same gameplay as the sequel: the much acclaimed Baldur's Gate. Shadows of Amn was developed by BioWare and released by Black Isle Studios in 2000 for PC (Windows) and Mac. 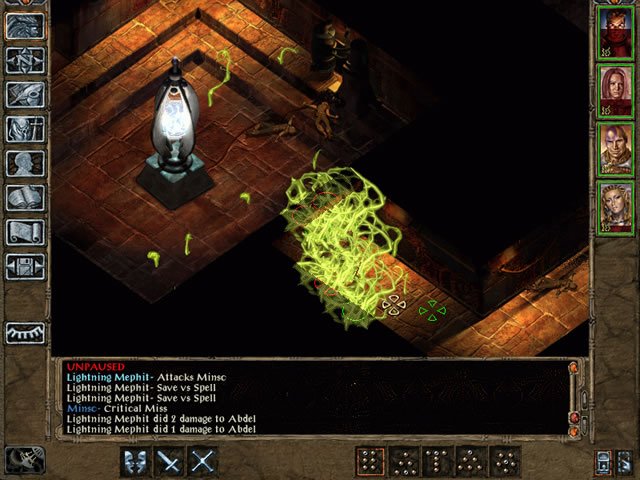 Share your love for Baldur's Gate 2: Shadows of Amn

IGN.com (2000) - "Baldur's Gate II: Shadows of Amn is not as beautiful or artful as Planescape: Torment. It's not as revolutionary to the genre as the original Baldur's Gate. Though, truly revolutionary titles are so rarely polished and well groomed that I can count the few that come to mind on a single hand, and artful, well-written games aren't always as fun or long. In many ways, Baldur's Gate II is the culmination of the powerful RPG renaissance that's been driving the genre over the last several years, a rebirth that originally started with its predecessor, Baldur's Gate. It redefines attention to detail, game balance, longevity, and spit and polish. It's not overbearing in its creativity, and it's not paper thin. In the end, it's simply a superb role-playing experience one of the best. There's not much you can compare it to. Baldur's Gate II has no peers. It commands your attention and will command your life for months. It's exactly the RPG I've been waiting for."

Baldur's Gate II: Throne of Bhaal, an expansion pack for Shadows of Amn, was developed by BioWare and published by Black Isle Studios, and released in June 2001.

The above text is licensed under the GNU Free Documentation License. This text is based on this Wikipedia article.

Have you ever played Baldur's Gate 2: Shadows of Amn? Did you like it? Did you hate it? Say something about this game!

Dungeons of Kairn
Terms and conditions Privacy policy Cookie policy Cookie settings
Click the link below to start the download.
The game is provided as a zip file "as is". There's no installer. To run a DOS game you need an emulator like DOSBox and/or a front-end like D-Fend Reloaded. To run a Windows game you will probably need a virtual machine.
Abandonware DOS is a free service. However, there are costs to sustain.
You can help with a small PayPal donation: you choose the amount.