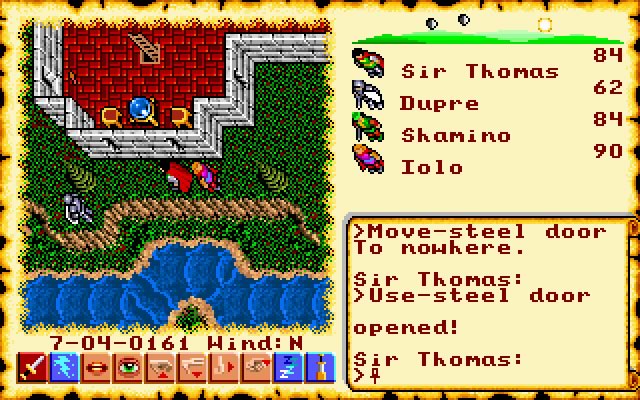 PC Review - Issue 7 (1992): "The final episode in the trilogy of, as creator Richard Garriot calls them, "ethical parables". A classic series of role-playing games that concentrated upon human emotions and relationships rather than senseless combat. This episode in the Ultima trilogy asks you to come to terms with an alien race, the Gargoyles, and try to understand them without resorting to the normal human knee-jerk reaction of booting the door down with guns blazing. Excellent gameplay, well designed with with bags of consideration to the plot and the message that it serves."

The Tenth Anniversary Edition box is autographed by Richard Garriott and Denis Loubet and contains the 45-minute audio tape "Ten years of Ultima".
Search on eBay

Have you ever played Ultima 6: The False Prophet? Did you like it? Did you hate it? Say something about this game!

Ultima 8: The Lost Vale
More from the same series

Dark Designs 1: Grelminar's Staff
Terms and conditions Privacy policy Cookie policy Cookie settings
Click the link below to start the download.
The game is provided as a zip file "as is". There's no installer. To run a DOS game you need an emulator like DOSBox and/or a front-end like D-Fend Reloaded. To run a Windows game you will probably need a virtual machine.
Abandonware DOS is a free service. However, there are costs to sustain.
You can help with a small PayPal donation: you choose the amount.