Eye of the Beholder

Eye of the beholder 3: Assault on Myth Drannor

Secret of the Silver Blades 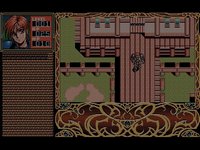