Leisure Suit Larry 1: In the Land of the Lounge Lizards walkthrough

Abandoned Games similar toLeisure Suit Larry 1: In the Land of the Lounge Lizards 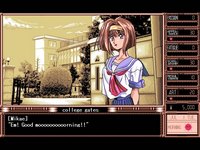