Ultima 2: Revenge of the Enchantress
1983

Challenge of the Five Realms
1992 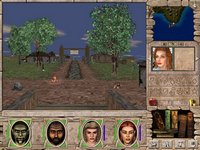