How to play Lode Runner 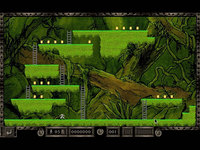 Arkanoid 2: The Revenge of Doh