Galaxian is an abandoned science fiction shooter game, developed by Namco and released by Atarisoft in 1983. Galaxian runs on DOS. Galaxian is a conversion from an arcade coin-op machine. Galaxian is considered an arcade classic. It's available for download.

How to play Galaxian

Use the arrows to move your ship and the spacebar to fire. F1 starts the game. 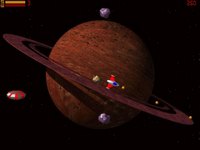