Remakes, in the video gaming world, are not uncommon. It happens that some lone programmer, or even a small company, do a remake of an old game. Usually, it's a matter of popularity: the more the game was popular back in its time, the more is likely that someone remakes it sooner or later.

What you may not know is that remakes of old video game exist from a long time. Think about it: some classics dates back to the early 80s or even the 70s. It was inevitable that, at some point not to far in the future, someone wanted to do a remake.

Game of the week: DOS 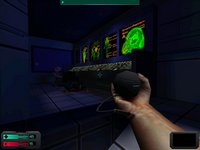