Traditionally, Macs haven't been the first choice for avid gamers. There was no shortage of games, but the cost of a Mac adequate for serious games has always been higher than the PC equivalent. Why buy a Mac when you can have a cheaper PC to play your favourite games?

Things are changing, but here on Abandonware DOS we are focused on retro gaming. Unlike Linux, there was no shortage of popular titles in the early years of video gaming (I'm talking about the 80s and the 90s).

Let's not forget that there are valid DOS emulators for Mac: Boxer is one of the most popular. Here is a short list of abandoned games published for Mac that are considered to be among the best by you gamers as voted on Abandonware DOS.

Looking for more games for other platforms? Search Abandonware DOS by system: 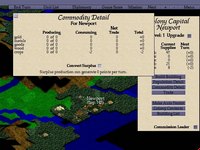