Before the age of blockbuster titles created by armies of programmers, level designers, visual artists and musicians, there was a time when small companies (or single developers) struggled to publish games and to sell a modest quantity of copies.

Imagine a time when a video game was developed by one or two people at most, sometimes in a garage. A game could fit into a single floppy disk (do you even know what a floppy disk is?) and you had to actually go in a shop and buy a tangible big box full of goodies. There were no downloads and no Internet (at least not the Internet we know today).

In those years, before Windows came to be, game companies developed some of the best games ever made for a Personal Computer. That's what I mean when I talk about DOS classics.

Alone in the Dark 2
DOS

DOS game of the week 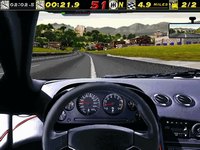 The Need for Speed
DOS